McCrory makes no secret of the time he spends at his home in Charlotte and at the Western Residence.

A review of travel records obtained by On Your Side Investigates through a public records request shows the Governor frequently uses state airplanes to get out of town, even when it means making extra flights.

On Your Side Investigates reviewed the two years of flight records and flagged any flight that could have been avoided had McCrory stayed in Raleigh: flights with no passengers, flights that carried McCrory's staff but not the Governor either coming to pick him up or going back to Raleigh after leaving him in Charlotte, or flights that included the Governor but that would have been unnecessary had he stayed in Raleigh.

Our review found 125 flights that fit the criteria: 48 flights with no passengers, 49 flights on which at least one member of the Governor's staff was aboard without him and 28 flights that included McCrory.

Flight manifests provided by the Governor's Office show McCrory frequently has the plane make extra flights to or from Charlotte to pick him up and d rop him off.

Records show that when the Governor comes to Charlotte, state planes typically fly in and out of Concord Regional Airport. McCrory then makes the roughly 30 minute drive from the airport to his home in central Charlotte by an SUV driven by a member of his security detail.

McCrory makes regular use of the state-owned Western Residence in Asheville, calendar and flight records show.

Often, McCrory's flights to Charlotte coincide with a public appearance but come on a Thursday or Friday so he can spend the weekend at home.

One such trip came just months into McCrory's term on February 28, 2013. Flight records show the plane flew McCrory, a member of his protective detail and three staffers to Asheville for "Western NC Public Appearances."

The plane then flew back from Asheville to Raleigh with no passengers, the flight manifest shows.

McCrory then spent the weekend at the Western Residence and, later, at home in Charlotte before driving back to Raleigh on Monday, March 4. 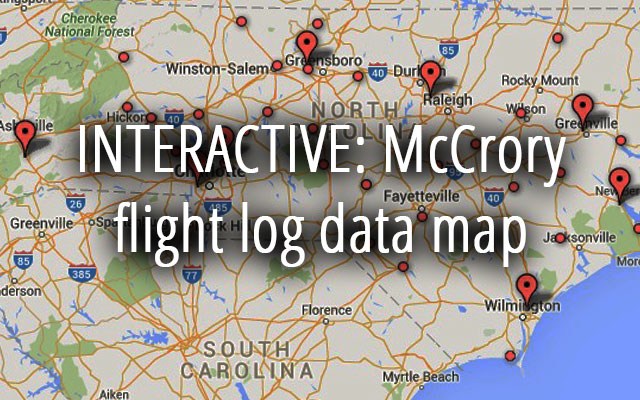 On Friday, July 12, 2013, McCrory started the day by flying from Raleigh to New Bern in eastern North Carolina for an event listed as a 'Main Street Tour' on his calendar. Flight records show McCrory then flew from New Bern to Charlotte, where he got off. The plane then flew back to Raleigh empty.

McCrory also had the state plane d rop him off in Charlotte the next Friday, July 19, 2013. Flight records show the Governor flew from Raleigh to Boone for events and flew from Boone to Charlotte. After d ropping McCrory off in Concord, the plane flew back to Raleigh with one staffer on board.

The following week, July 26, 2013, McCrory flew into the Concord airport and drove to a bill signing in Cornelius. The two remaining events following the bill signing are redacted on the calendar provided by McCrory's office. A calendar entry for July 26 indicated McCrory ended the day in Charlotte. All calendar entries for the two days after that are redacted.

Flight records provided by the Governor's Office show McCrory also used state airplanes to commute to and from Charlotte daily.

One such period of daily back-and-forth came in early November 2013.

On November 7, 2013, McCrory flew from Raleigh to Asheville for Billy Graham's 95th birthday party. Flight records show McCrory then flew from Asheville to Charlotte for the evening. The plane continued on to Raleigh without any passengers on board.

The state plane started the next morning, November 9, 2013, by flying back to Concord to pick McCrory up in Charlotte and flying to Fayetteville for a Veteran's Day event. McCrory then flew back to Charlotte and the plan continued on to Raleigh.

McCrory's calendar for Sunday, November 10, 2013 and that following Monday do not have any events and are not clear on when or how he returned to Raleigh.

Such use of the state airplane could be a violation of the travel policy outlined in the North Carolina Office of State Budget and Management's budget manual, which outlines travel policies.

"An employee traveling on official state business is expected to exercise the same care in incurring expenses that a prudent person would exercise if traveling on personal business and expending personal funds," the manual reads.  "Excess costs, circuitous routes, delays, or luxury accommodations and services unnecessary, unjustified, or for the convenience or personal preference of the employee in the performance of official state business are prohibited."

Francis DeLuca, president of the conservative Civitas Institute, told On Your Side Investigates he is opposed to the state owning any passenger aircraft.

"North Carolina state government does not need an air force," DeLuca said. "There's only really three purposes we think the state should own aircraft for. One would be true law enforcement functions, two would be to fight fires in our state forests and the third would be maybe for transport – medical transport for our state hospitals."

"When you have planes, you're going to invite controversy over their use," he said.

McCrory is not the first North Carolina Governor to attract attention for his use of state aircraft.

In 2008, then-Governor Mike Easley, a Democrat, drew scrutiny for his use of the state helicopter and airplanes to fly back and forth from Raleigh to his home near the coast in Southport.

The details of Easley's state aircraft use are outlined in a report from the conservative think tank John Locke Foundation.

Like McCrory, the Locke Foundation's report found Easley often scheduled official events near his home or had the state's aircraft make connecting stops to his home on his way to or from events.

A spokesman for the John Locke Foundation declined to make anyone available to comment on the McCrory's use of state aircraft when reached for an interview.

By comparison, Easley's successor, Democrat Governor Bev Purdue, rarely used state aircraft to trips that could have been avoided by staying in Raleigh.

A review of Purdue's flight records for the first two years of her term - the same time period for which McCrory's records were examined for this story - show she took a total of 210 flights on state aircraft. Of those flights, a total of 21 were found to have been avoidable during our review.

On Your Side Investigates first requested McCrory's travel records in early January. They were provided in mid-May after multiple follow-up requests for the documents.

Within a week of receiving the records, we requested an on-camera interview with McCrory through the Governor's press office.

Two emails sent a week before this story aired seeking an answer on whether McCrory would make himself available for an interview regarding his use of the state's airplanes were ignored.

A phone call placed late Tuesday was returned by the Governor's press secretary, Graham Wilson, the following day.  In a statement emailed Wednesday afternoon, hours before this story was set to air, defending McCrory's use of state airplanes.

"The Governor is proud to visit his home and office in Charlotte. The current manner of using state aircraft is the most efficient and lowest cost option when it comes to expense and man-hours," Wilson said. "Not only does it cost substantially more to keep the aircraft and crew at a specific location overnight, but it prevents that flight crew from being available to fly other missions for the rest of that duty day."

A review of aircraft manifests provided by McCrory's office shows an airplane used by McCrory was also used by staff from another agency six days in 2013 and 2014. Of those six days, only three of them saw state personnel use the state airplane for official business after the plane was used by McCrory.

CMPD Chief: Woman shot by police as she reportedly tried to run over officer in southwest Charlotte

‘Why would he sit here and cause this?’: Mother of baby shot in east Charlotte disputes account of shooting

Person seriously injured after 7 vehicles, including tractor-trailer, involved in crash on I-485 in Huntersville