School bus catches fire with 6 kids on board

CHARLOTTE, NC (WBTV) - Investigators are trying to figure out what started a school bus fire while students were on board Wednesday afternoon. 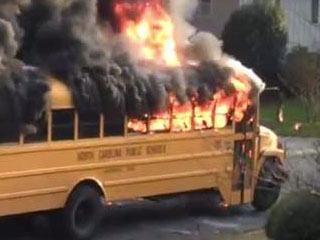 Click here to view photos of the bus fire

The incident happened in the 1200 block of Bearmore Drive in southeast Charlotte just before 5 p.m.

According to Charlotte Mecklenburg Schools, six students and one driver were on the bus when the fire started.

CMS officials admit there are a baffled over how a school bus turned into a fire ball.

Brad Johnson is a transportation supervisor with the school system.

"We're looking over safety records, inspection records, and things of that nature," Johnson said.  So we're doing that in conjunction with the state."

The bus - number 295 - was dropping off students from Chantilly Montessori School, CMS said.

Published reports in recent years have pointed to the fact that several school busses have been recalled by their manufacturers.

CMS bus 295 was made by Freightliner, and school officials want to make sure that there haven't been any been past problems.

"Were not that far along in the investigation, so we're not sure if that's one of the vehicles that has a recall on it or not," Johnson said.

Investigators are working to determine the cause of the fire.

A CMS spokesperson told WBTV they have more than 800 busses on the road most days transporting more than 30 thousand students.

Post goes viral after man with special needs fired from his job of 20+ years, franchise organization calls it ‘an unfortunate mistake’

Two of North Carolina’s “Most Wanted” arrested in Rowan County