LANCASTER, SC (WBTV) - A Lancaster man has been arrested after police say he shot and killed a former Major League Baseball player near an elementary school early Tuesday morning. 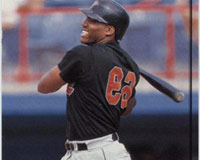 Click here to view a photo gallery of Danny Clyburn

According to the Lancaster Police Department, officers were called to the 600 block of North Market Street around 1:58 a.m. Tuesday morning to the report of a shooting.  This is less than 1/5-mile away from Clinton Elementary School.

When officers arrived they found Danny Clyburn Junior lying in the front yard of a home. Clyburn was reportedly found unresponsive and suffering from a gunshot wound.

Emergency crews responded and determined that Clyburn had died from his injuries.

Clyburn is a former Major League Baseball player, where he played as an outfielder for the Tampa Bay Devil Rays and Baltimore Orioles.

Clyburn played in 13 games as an outfielder for the Baltimore Orioles in 1997 and 1998, where he finished with seven hits, one home run and three runs batted in., according to Baseball-Almanac.com.

A man who identified himself as Clyburn's uncle told WBTV that Clyburn was in Lancaster visiting his children as part of a three-day trip.  He was also picking up a vehicle to take back to California, where he now lives, Michael Hough said.

"We were just drinking and getting high," Hough said.

Michael Hough told WBTV that he went to bed around 11:30 p.m. Monday night and was woken up Tuesday morning around 1 a.m. to someone knocking on his door saying Danny had been shot.

"Next thing I know some body's knocking on my door telling me my nephew's dead," said Hough.

Witnesses told officers that Derrick Lamont McIlwain, 36, had been arguing with Clyburn leading up to the shooting.

McIlwain turned himself in to deputies at the Lancaster County Sheriff's Office on Tuesday morning. He was transported to the Municipal Justice Center where he continued to cooperate with Investigators.

McIlwain was charged with Murder and Possession of a Firearm during the commission of a violent crime. He remains in police custody and is awaiting a bond hearing.

Family members told WBTV that Clyburn and McIlwain were friends when they were growing up.

Williams who now is the head baseball coach at USC-Lancaster says Clyburn would come to talk to College players at USC-L about Pro-Baseball and share his experiences.   Coach Williams says he was a role model in Lancaster and Clyburn's presence will be missed.

This shooting nearly a mile away from a shooting from last week.

In that case, a man was shot multiple times along the 2000 block of Pardue Street last Monday night.