CHARLOTTE, NC (WBTV) - Police in Charlotte have arrest warrants for a man after officers say he shot a man in front of a sporting goods store at Northlake Mall earlier this week.

According to Charlotte-Mecklenburg Police, officers are searching for 25-year-old Carlton Lamonte Ardrey in connection to the Monday afternoon shooting.

Police say 23-year-old Gregory Tillery was hit while getting into his car outside of the Dick's Sporting Goods. 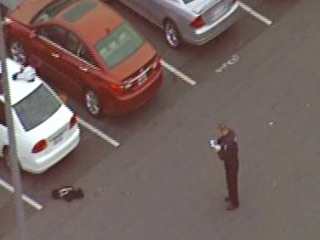 According to Charlotte-Mecklenburg Police, officers were called to 601 Northlake Mall around 4:30 p.m. to the report of a shooting.

Officers told WBTV that a man had been shot in the leg and was transported to the hospital and is expected to be okay. Earlier reports from emergency crews said that Tillery suffered potentially life-threatening injuries.

"This is the first time that I'm aware of an act like this has happened since the mall has been opened," Lt. Brian Foley said.

A witness told WBTV that at least 5 shots were fired during the shooting.

The incident happened when Tillery was coming out of mall and was getting into car just as another car drove up and shots were fired at the 23-year-old man.

Emergency crews say the victim was transported to Carolinas Medical Center-Main.  A nurse later told WBTV Tillery had been released from the hospital.

Officers told WBTV that shots were fired at a second man, who was with the victim, and that a bullet went through his pants leg.

Three cars were hit by the shots, police said.

"There were no persons in those vehicles ..there were no bystanders in the area when the shooting happened," Foley said.

But it's the "what ifs" that make some folks uneasy.  "They could have hit anybody else..it couldn't been somebody's kid..it's scary," Jenifer Plautz said. Plautz says she comes to the mall at least once a week with her children. She says she wishes people would think before they act. "What if it was your family..what if it was your kid or someone you knew."

The shooting took place in the parking lot near Dick's Sporting Goods and Dillard's.  Police say they're working with mall security to see if the act was caught on tape.

They're also interviewing the two people who were with the man who was shot to figure out the why in this case.

Officers signed warrants against Ardrey for Possession of Firearm by Felon, ADW-Inflicting Serious Injury and Assault with a Deadly Weapon.

Ardrey is 5'11", 210 lbs and is to be considered armed and dangerous, police told WBTV.

For additional information regarding the incident on Monday, reference CMPD complaint number 2012-0206-163004.  The Violent Criminal Apprehension Team has been working tirelessly in their effort to take Mr. Ardrey into custody.

NC a ‘lawless’ land for HOAs and community associations

‘It is very, very painful’: Family mourns after suspected murder-suicide that left 4 dead