CHARLOTTE, NC (WBTV) - A Conover woman is facing child abuse charges after sources say she was caught injecting something into her infant daughter's Intravenous (IV) tube.

According to Youth Crime Detectives with the Charlotte-Mecklenburg Police Department, 26-year-old Ladonna Parlier was arrested after an investigation showed she abused her 5-month-old daughter on multiple occasions. 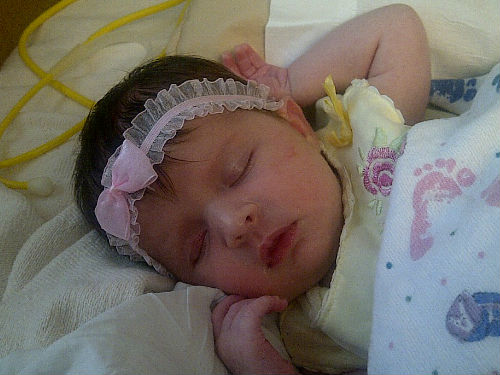 Sources told WBTV that Parlier was caught on camera trying to inject something into her little girl's IV tube. The infant girl remains in Carolinas Medical Center-Main and is listed in stable condition, police told WBTV.

According to a Charlotte-Mecklenburg Police report, officers were called after Parlier "aspirated blood from [the infant] and then some unknown substance into the victim with syringes, while both of them were staying in the same room."

Relatives and neighbors told WBTV that the little girl suffers from a cleft palate.

Police say they investigated Parlier on allegations of abuse and charges were filed after a joint investigation with the Department of Social Services.

Parlier's husband, Tim, admits being very close to his baby girl Naomi, but he is now devastated by what police say his wife did to their 5 month old daughter.

"I can't point fingers at her, point all the blame, but waking up this morning learning new stuff," he said. "I can't rule it out."

He also said that Parlier was put on antidepressents after the baby was born but said she hadn't been taking them recently.

Ladonna Parlier was taken into custody and charged with five felony counts of child abuse inflicting serious injury and five misdemeanor counts of child neglect.  She's being held in the Mecklenburg County Jail under $137,500 bond.

Parlier's brother, Timothy Justice, is stunned by the trouble his sister now faces.

"Right now we're confused, because we thought she would not do anything of this nature," he said. "I don't think there's anything in the world that she loved more than that baby."

Family members are trying to learn what may have happened to Parlier's daughter five month old Naomi who is at Carolinas Medical Center.

"She's a good woman, I don't understand why she done what she done," Justice said. "Well the evidence says she did. I guess you can't fight evidence."

Parlier is expected to make her first court appearance of Friday afternoon.

The assistance from CMC staff was critical in this investigation, police told WBTV.

Couple says Starbucks charged them nearly $4,500 for 2 cups of coffee

Rain, possible snow for some returns for the weekend after sunny days