By Ron Lee and Chris Dyches 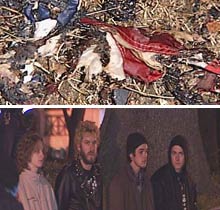 Click here for more photos from the flag burning and suspects

Charlotte-Mecklenburg police weren't sure earlier if the four men who set fire to two flags were associated with the Occupy Charlotte movement.

But, WBTV has learned that one of the men is the media spokesman for the Occupy group and has been the contact person listed on press releases from Occupy Charlotte.

The fires happened with in feet of the group's encampment.

Earlier reports indicated one flag was burned, but a police report says that 2 US flags were burned.

Officers said they noticed the suspects lighting something on fire directly in front of the Occupy camp along Trade Street around 12:30 a.m. Friday morning.

Police swarmed the area, and detained the men while firefighters were called in to knock down the flames. About $30 worth of damage was caused to landscaping at the site.

It was only after the fire was out did officials figure out what was burning, the American flag.

Police said the men claimed they were burning the flag in protest.  Burning the flag is not illegal, however doing it outside of a fire pit, and within ten feet from flammable tents poses a problem.

Bargert is the media spokesman for Occupy Charlotte and in earlier media reports said he had been with the group since "the beginning."

All four men were charged with being careless with fire. That charge is a misdemeanor under the city ordnance.

Police officers told WBTV the protesters gave them a verbal tongue-lashing while being detained, calling then fascists, as well as using other colorful words.

Crime Scene Investigators collected the remains of the flag, and placed it into evidence. A cigarette lighter was also confiscated.

Two struck, killed by lightrail while conducting memorial for person killed by train at same location