KERSHAW COUNTY, SC (WIS/WBTV) -  Hundreds of people showed up in McBee Wednesday evening to remember Hope Melton, who was chased on a South Carolina road, kidnapped and then killed the day after Christmas.

Folks who knew her say she was polite and pleasant, and is hoping her family will be able to heal. A family visitation is planned for Thursday, Dec. 29, from 5-7 pm at a funeral home in Chesterfield. (Click here for full funeral details) 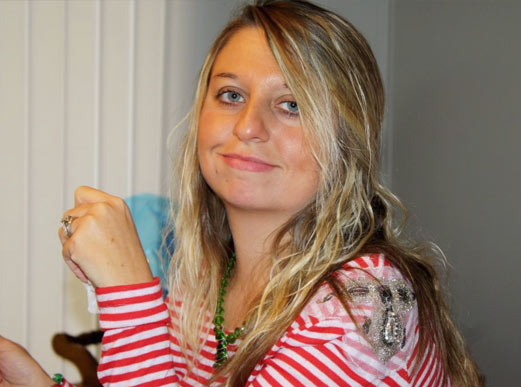 The vigil that was attended by several hundred people was held at the store where Melton worked in McBee.

At another store near Jefferson, she was last seen on surveillance video having a brief "run in" with the suspect, who later admitted to killing her.

Meanwhile, video was released that shows the last time the Melton was seen in public.

The video shows the final minutes of Melton's life, when she made that fateful stop at Chesterfield County gas station.

In the video, Melton walks within inches of the man investigators say kidnapped, raped and beat her to death.

The video captures the last images anyone will ever see of Hope Melton alive.

It came Monday as Melton stopped at Jack's convenience store in Jefferson.

The footage shows accused killer Nickolas Miller walk in and head to the beer cooler.

The clerk rings him up, at the same time Hope Melton pulls up to the gas pumps outside.

As Melton walks in the store to pay, Miller walks out the door, standing only inches away from her. Then he watches her walk in.

Melton pays the clerk, then walks back to her car as Miller parks his red Chevy off to the side.

As Melton's white Chevy pulls away, Miller pulls out behind her.

"She had no idea that she was in danger at that point," said Hope Melton's brother-in law Frankie Melton.

Frankie says Hope tried to call her grandmother several miles away from the store, after she realized someone was following her.

"He got right up on her back bumper and she, at that point, called her grandmother and said that someone was following her and it was a black man from the store, that she had seen at the store," said Frankie.

Miller tried to rape her several times, according to deputies and drove her around in his car for more than an hour.

"The details are absolutely incomprehensible; this was not a crime of passion in a moment," said Frankie. "This guy had a long time to think about this. He followed her for miles. He drove her around in his car for several miles"

One of the attempts happened only yards away from Miller's home, where deputies set up a crime scene Monday.

"Honestly, we hoped that if she was dead it was by a gunshot and it was quick, but it wasn't quick," said Frankie. "She suffered, she suffered, he had time to think about it and he did it anyway, he's a monster. He deserves to die."

According to Sheriff Jim Matthews, he's met with the solicitor and plans to seek the death penalty against Miller.

It could take several weeks before the solicitor makes a final decision on that.

But for now, Miller is currently in a Kershaw County jail cell, awaiting a bond hearing on a murder charge.

One killed in crash on Pineville-Matthews Road in south Charlotte