CHARLOTTE, NC (WBTV) - A jury has found a man guilty in a fatal crash that killed three people while he was racing his car and crashed in 2009. He has been sentenced to between three and four years in prison.

Tyler Stasko, 23, was found guilty of involuntary manslaughter on all charges Tuesday evening.

Police say Stasko and Carlene Atkinson were speeding down York Road when Cynthia Furr pulled out of her Riverpointe neighborhood near Lake Wylie in April 2009. 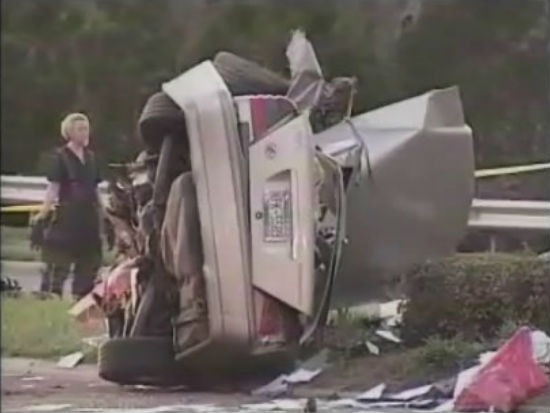 Stasko's friends and family approached him one by one, giving him hugs during a short break after the verdict was read.

This is the maximum penalty for all charges.

"I wish I could take this day back," Stasko said during sentencing on Tuesday, "And I know I can't."

After being sentenced, Stasko was taken out of the courtroom in handcuffs.

During the closing arguments in the trial of Stasko ended with the defense asking for mercy and the prosecution asking for the heaviest conviction.

Stasko began crying and was surrounded by his family as the closing arguments ended. The jury had already been cleared from the room as he wept.

The families of the victims wiped tears away during the closing arguments. Prosecutors showed pictures of the wreckage again, and described how Furr had no way of knowing Stasko and Atkinson were coming over the hill.

The prosecution and defense both rested in the case on Friday after Stasko testified is his own defense.

Stasko told the jury that he does not remember the impact of the crash, but he testified to what happened before and after.

"I just remember passing another vehicle, I was in the left lane and then a church and the next thing I remember I was waking up in the car," said Stasko.

Stasko's taped statement to police right after the crash reveals details of the moment he crashed into Cynthia Furr's Mercedes.

"As soon as I came over that hill, the car was stopped and it wasn't doing anything and then right at the last minute it stepped on the gas and started pulling out," said Stasko in the taped statement to police.

The 23-year-old describes slamming the brakes; however police officer Jesse Wood testified that there were no skid marks.

"I know based on what happened you want to hold someone accountable," said defense attorney Deke Falls during closing arguments. "He is not a murderer."

Jurors rode went out to the scene of the crash last Thursday, escorted by police who blocked the road so jurors could view the accident site.

Rex Thomas was also a passenger in Stasko's car. The teen survived with a broken foot and said Stasko tried to avoid the accident by hitting his brakes.

Since the accident, a traffic light has been installed outside the neighborhood. Steve Price, Mackie's father and Cynthia's husband, has also set up a foundation to help those in the community in honor of his loved ones. To read more about the Mackie Price Family Foundation, click here.

There is also a pending civil lawsuit addressing the city's and developer's responsibility in installing a traffic light sooner on York Road.

Both Stasko and Atkinson have spent most of the past two years out on bond. Atkinson will be facing a judge at a later date. She had a history of speeding tickets.

If the jury finds Stasko guilty, they must also decide if he is guilty of second degree murder, involuntary manslaughter, or misdemeanor death by vehicle.

Involuntary manslaughter is a lesser charge which shows negligence, but not malice.