BEAUFORT, SC (WTOC) - For many of us, the Confederate flag conjures up a wide range of emotions and thoughts. 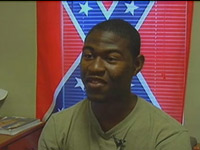 Click here to view photos of the student, his dorm room and the flag

Last month, the Confederate battle flag whipped up controversy on the campus of University of South Carolina at Beaufort.

One student fought for the right to hang the Confederate flag in his dorm room window.

Not a white student. A black student fought for what he says he believes in.

18 year-old Byron Thomas, a North Augusta, SC, native and freshman at USCB, is African American. He wants the right to hang the flag in his dorm room window.

After multiple complaints, Thomas was told the flag must come out of the window.

"To me it is a heritage thing and a pride thing. It is not a racist thing whatsoever," Thomas told WTOC.

Thomas is, all of a sudden, the most popular guy on the Beaufort campus after his Youtube video explaining his position on the flag went viral along with being featured on CNN.

"I read a CNN comment that I disgraced the black community," Thomas said.

What do you think about this? Click here to leave your comments!

Thomas decided to do something he couldn't do at home. "No sir, because my parents have strong feelings about it," he said.

He hung the Confederate flag in his dorm room window for the rest of his peers, with a courtyard view, to see.

"There would have been a serious problem if I had done it in my house," Thomas said. "I'm 18 now. I should have my own right to believe how I want to believe about things."

Thomas said his feelings about the flag were intensified after he did a research paper on the flag in September.

"I'm no idiot. I researched both sides but in the end I formed my own conclusion," he said.

By November, the housing staff at USCB told Thomas the flag must come down.

"They never told me people were complaining. They said I was violating a racism code," he said.

"We received about 20 to 24 complaints," Doug Oblander, Vice-Chancellor of Student Development at University of South Carolina at Beaufort, told WTOC. "When they open their windows to let the sun in, they look directly into this flag."

Oblander told WTOC details of the case took him by surprise. "If you had asked me who would have the Confederate flag up in their window I would not have thought it would be an African American student," he said.

However, the action alone did not shock Oblander.

"You are talking about 18 to 20 year olds. People will test limits," Oblander said.

After an appeal by Thomas, along with national attention and a review by university lawyers,  Thomas was told Thursday morning it had been recommended by counsel that he be allowed to put the flag back up.

"It probably is an infringement of his First Amendment rights," Oblander said.

"The college told me personally I could put the flag back up and exercise my Freedom of Speech," Thomas said.

His parents still don't approve of the flag being hung. "Ooohh...Wow. We had a long conversation about this," he said. "If we carry their opinions that flag will always divide."

As of Thursday night, the flag is back.

"That flag means to me southern heritage. I love the south. I've always lived in the south. Everything about the south, to me, is great," Thomas said.

School leaders are organizing a forum in the spring with student government to discuss this issue. Thomas is a member of student senate. A few other complaints about offensive things in windows have come up this fall, including one student displaying a swastika.

Below is the statement to staff and students from  University of South Carolina at Beaufort's Jane Upshaw regarding the flag controversy.

A spirited debate has taken place on many college campuses for some years about the Confederate flag and whether or not it should be displayed on public buildings.  This conversation has touched the USCB community this semester and has now entered the media via a CNN iReport posted November 27 and an article in our local papers this morning.

Internally at USCB, we as community members are guided by the Carolinian Creed, which states:

The community of scholars at the University of South Carolina is dedicated to personal and academic excellence.  Choosing to join the community obligates each member to a code of civilized behavior:

As a Carolinian, I will….learn from differences in people, ideas and opinions…demonstrate concern for others, their feelings and their need for conditions which support their work and development.  [www.uscb.edu/about_us/the_carolinian_creed.php]

The Confederate battle flag was displayed in the window of a USCB on-campus student apartment this semester.  When USCB students expressed concern about the presence of the flag in their community residential space, USCB staff asked the student to remove the flag from the window, out of respect for his fellow students' concerns.  The student was told that he and his roommates could display the flag inside their apartment.  We acted in the spirit of the Carolina Creed to resolve this issue within our community.

However, because of USCB's firm belief in the First Amendment and its right of free speech, the University cannot and will not prohibit these flags or other symbols that our students choose to display. To do so would contest the constitutional right of free speech or expression – a principle we hold sacrosanct.

In the spirit and practice of our commitment to civil discourse, we have asked the USCB Student Government Association to sponsor a forum next semester. The focus of the forum will be how we as a community of scholars honor the Carolinian creed's call to respect  each student's "need for conditions which support their work and development" and also maintain each student's First Amendment rights.

USCB is an institution that opens its doors to everyone, regardless of their ethnicity, religion, nationality, or ideals. Part of the college experience for our students is learning from the diversity that surrounds them. It is my hope that all members of the USCB family, as well as visitors to our campus, will use thoughtful judgment before acting in a way that others may find offensive. The University is committed to creating an environment that is supporting and inclusive to all the members of the USCB family – past, present, and future.