8 arrested as protesters hang banner outside Bank of America HQ

CHARLOTTE, NC (WBTV) - Eight protesters were reportedly arrested in uptown Charlotte on Tuesday morning after they climbed flag poles in front of Bank of America with a banner that said "Not with our money." 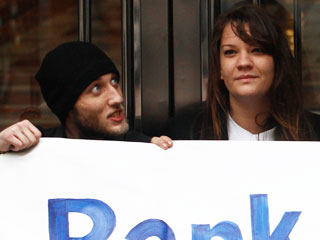 According to the Rainforest Action Network, eight people were arrested on Tuesday for protesting what they call "reckless financing practices" from Bank of America.

The group says Sam Maron and Jamie Trowbridge were arrested after unfurling a banner reading "Not with Our Money" from atop two 50-foot flagpoles at the entrance of the banks headquarters in Center City.

"Bank of America is foreclosing on our neighbors and it's foreclosing on our climate. To be honest, I'm embarrassed that I'm still a customer," said Trowbridge, an Appalachian State University student who was one of the two climbers arrested at Tuesday's protest.

"Coal is dirty at every stage in its lifecycle. No longer will Bank of America fund coal with my money. When I get back to school, I'm going to cut up my BoA debit card, and help other students do the same."

RAN officials say two were supporting the climbers, and the other four were blocking the main entrance to the bank's headquarters.

The group says as more areas attempt to evict Occupy protestors from public spaces, more protesters will show up at Bank of Americas across the country.

"Bank of America is in the center of the Occupy Movement because of its reckless financial practices that put profit before people and planet," said Amanda Starbuck, Rainforest Action Network's Energy and Finance Campaign Director.

The Charlotte-Mecklenburg Police Department is in the process of crafting a new ordinance that could affect the impact of Occupy protesters here in Charlotte.

Captain Jeff Estes with the Charlotte Mecklenburg Police Department says CMPD is working on an ordinance to further regulate protests and picketing. He said the ordinance would regulate certain behaviors. Camping on city property could also be part of it.

"I heard about that. We've got legal team representing us at city council," said Occupier Scotty Foster. He's been camping out with the movement the past four weeks.

Right now, there's not a single city ordinance to force them out. The space is considered a public forum. Protestors are using bathrooms in government buildings, some have even gotten mail at the old city hall, and the security cost is adding up.

CMPD gave no timeline for the presentation to City Council. Council member Andy Dulin said he supports the discussion, but would like to wait until Mayor Anthony Foxx returns from a trip to China.