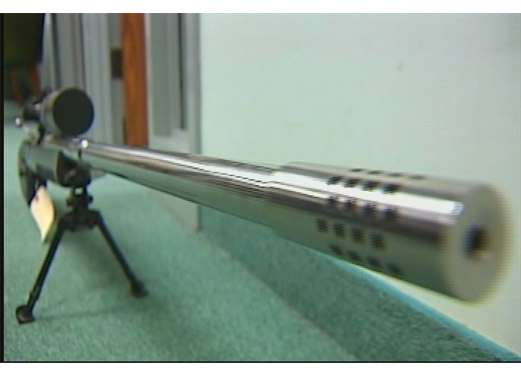 On Thursday, Mooresville police said they found  audio/video equipment that had been stolen from another racing team in Mayfield's home.

Mayfield was arrested in his home in the town of Catawba on possession of methamphetamine charges, according to the Catawba County Sheriff's Office.

Deputies had gone to Mayfield's home to execute a search warrant on a tip that there was stolen property in the house.

According to the Lincoln County Sheriff's Office, detectives found 40 firearms, 1 1/2 grams of meth and a number of items that had been stolen from Lee Boy Inc. and Larry Grant, Inc., a trucking company in Lincolnton.

On Thursday, Mooresville police said they found commercial audio and video equipment reported stolen from Red Bull Racing at 192 Raceway Dr. in Mooresville.  This theft was reported to police in February 2011, police said.

Mayfield has not been charged with possessing stolen property, but police said they are investigating.

Investigators say they also recovered approximately 40 guns during the search as well.  The guns ranged from antique weapons to high-powered rifles.

The guns are being run through the Bureau of Alcohol, Tobacco, Firearms and Explosives gun tracing website to make sure none of them have been reported as stolen.

The stolen goods were located in a building and trailers on Mayfield's property and were returned to the owners.

Tom Weese, from the Lee Family Real Estate, LTD, says about $65,000 worth of items were stolen from his business last year.  He recovered most of his stuff from police Tuesday night.

"Anytime someone enters your property without your permission," Weese said.  "You are going to feel violated. It's really scary. It makes you mad."

"To me they were just thieves," Weese told WBTV.  "They just wanted to steal stuff."

The items that belonged to Larry Grant, Inc. included various truck parts, an engraving machine, truck mirrors, electric motor controllers and items that were stored in his warehouse on South Grove Street.

Detectives estimate the total value of the stolen goods at nearly $100,000.

During the search, deputies said they also found approximately 1.5 grams methamphetamine in the home. Investigators say the meth was divided between a half-dozen baggies.

The investigation is continuing and additional charges are pending in the case. Weese believes there should be more arrests.

"It wouldn't even be possible for one man to conduct an operation like this," the victim said. "It's unbelievable that the operation they had going on down there."

Weese says he would like to thank the police for cracking this case. He says he wants justice served by the culprits getting arrested.  The victim got most of his things back. He is still missing dump truck back. He says it has sentimental value to his family, that's why he is offering a cash reward for its return.

Mayfield was scheduled for a court appearance Wednesday morning. His is out of jail on a $3,000 bond.

NASCAR driver Jeremy Mayfield was suspended indefinitely after failing a random drug test in May 2009.

The result stems from a test at Richmond International Raceway.

Later Mayfield told WBTV the results of this test were not accurate.  He claimed the results turned up positive because he took allergy medicine and Adderal for his Attention Deficit Disorder.

Mayfield and NASCAR were then involved in various lawsuits.