Wreck explained, 2 charged in I-85 crash with concrete slab on truck 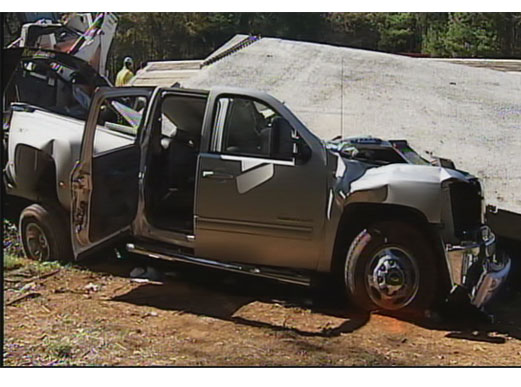 Click here to view photos of the wreck scene

The wreck happened just before noon on Tuesday and involved several vehicles, including three tractor trailers and a pick-up truck.

On Wednesday, the N.C. Highway Patrol cited two of the drivers in the accident, including the driver of the pickup that was crushed.

Justin Carrick, 26, of Lexington and Steven Grantham  of Georgia were both charged with failure to reduce speed.

Carrick also had an expired tag on his trailer that he was cited for.

The Highway Patrol said the wreck happened like this:

An emergency call caused traffic to back up on I-85 and the truck hauling the concrete slab was stopped on the interstate.

The pickup truck that was later flattened by the concrete slab was driven by Carrick and he failed to reduce his speed. Carrick attempted to avoid the concrete truck, but he ended up side swiping it in a minor collision and was then stopped on the right side of the flatbed.

At the same time, the driver of the car carrier, Grantham, also failed to reduce his speed slammed on brakes and hit the black tractor-trailer .

That collision pushed both tractor trailers into the flatbed truck, causing the concrete slab to dislodge and slide onto Carrick's pick up.

The Highway Patrol told WBTV that three men in the pick-up truck were injured, one seriously. A crane from a nearby road construction project was brought in to move the concrete slab out of the roadway.

The driver of the pickup, Carrick, was trapped for two hours before he was freed. The two passengers were pulled from the truck relatively quickly.

By 1:15 pm, two patients were taken from the scene by an ambulance and another was loaded into a Med Center Air helicopter.

The airlifted patient -- the driver of the truck -- was in critical condition and was taken to Carolinas Medical Center-Main. The other two men were taken to CMC-Northeast with non-life-threatening injuries.

Crews opened one northbound around 2:30 p.m. to clear the vehicles caught between the last off-ramp and the wreck.

They then closed the interstate between exits 49 - 52 while crews worked to clear the debris.

By 5 p.m., the North Carolina Department of Transportation said all lanes were back open.

‘I’m very nervous for what’s to come:’ More than 500 CMS teachers have resigned since Aug. 1