CHARLOTTE, NC (WBTV) - Another Halloween display triggered an emergency response – this time it was a "man" hanging by his hands from the rain gutter of a South Charlotte home. 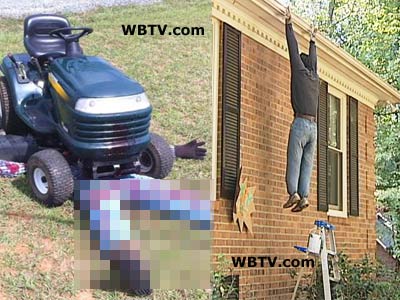 Click here to view photos of both Halloween displays that triggered 911 calls!

The first incident happened earlier this week in Rowan County when a driver saw what he thought was a  bloody body under a riding lawnmower. (Click here to read that story and listen to 911) The Rowan County motorist called 911 and the story caught fire ending up first on WBTV.com then on Gawker, Telemundo and the London Daily Mail.

The latest false alarm happened Wednesday around 9 a.m. when a person on Houston Branch Road in Charlotte thought they saw a man who had lost a ladder and was in big trouble.

The reporting person said they saw a man hanging by his hands from the gutters on the roof of a home.

The Charlotte Fire Department was dispatched to the scene in the 2900 block of Houston Branch Road.

The "man" was actually a dummy and was hanging by its hands from the gutter of a home.

That illusion is actually more popular around Christmas and is typically accompanied by a strand of Christmas lights that are hanging askew also. A crooked ladder is sometimes added for more realism.

In this case, the display was for Halloween, fire officials confirmed.

"The incident this morning was deemed as 'Good Intent' (call in) reference to a Halloween prop," said Capt. Mark Basnight, a spokesman for the Charlotte Fire Department.

A "good intent call" is sort of like a false alarm but with reason to think that it was an actual emergency and the caller had "good intent" when they made the call to 911.

One killed in deadly shooting in Rowan County