NEWTON, NC (WBTV) - In the plea in the death of Zahra Baker, new details were revealed in court about what police found and when the 10-year-old girl actually died. 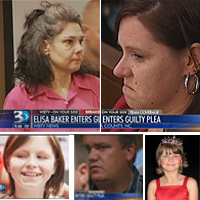 On Thursday morning, Elisa Baker pleaded guilty to second-degree murder in the death of her stepdaughter, Zahra.

For the first time, police said they think Zahra died on Sept. 24, 2010 and that her cell phone records show she was at areas that day where Zahra's body parts were  later found.

Elisa Baker told police she found Zahra around 4 p.m. on Sept. 24, unresponsive in her room, said Cpt. Thurmond Whisnant on the stand Thursday.

Baker added that Zahra wasn't feeling well that day, according to Whisnant.

Another investigator said Thursday that many of Zahra's blood drops were found in Zahra's room after they examined it carefully.

Elisa told police that after she found Zahra, she then called Adam Baker who was at work and told Adam what happened, detectives said. Adam came home and said they could not call 911, Whisnant said.

But later on the stand, Whisnant testified that when they looked at Elisa Baker's cell phone records and the calls that were made to and from Adam Baker.

Those calls, Whisnant said, show that:

Between 3:30-4 a phone call was made in the International Drive area, where other items were found, Whisnant said.

Whisnant later said Thursday that Elisa Baker was still sending text message to Adam Baker in early October 2010 that implied that Zahra was still alive at that point.

Adam Baker told police around that time that he worked many hours and rarely saw his daughter.

"Since May, I've smoked more marijuana than I've spent time with my daughter," Adam Baker told police around that time, Whisnant said Thursday.

Major Clyde Deal of the Hickory Police revealed on the stand Thursday that before Oct. 24, 2010, there were 340 investigative events of which 58 were searches for Zahra. Police also searched landfills looking for a mattress.

After Oct. 24, police then got a call from defense lawyers saying Elisa Baker was willing to offer assistance in finding Zahra's dead body. Police said that they likely would not have found Zahra's body without help from Elisa Baker.

Parts of Zahra's body were found in multiple sites around Hickory months after her disappearance was reported. Zahra's armbone, prosthetic leg, torso and pelvic area were found, investigators said for the first time in court Thursday.

Police said Thursday that they also found a saw, which they believe was used to cut up the girl's body. A vertebrae and other bones of Zahra were also found with saw cut marks on them, an investigator said Thursday.

But Zahra's head and many other body parts were never found.

After the plea was announced Thursday morning, the prosecutor in the case said that the family of Zahra is entitled to the cost of transporting the child to Australia for a proper burial.

Zahra's remains are held as evidence and the prosecutor said he will request this after testimony.

‘I love you, Dad’: Family and friends remember WBTV meteorologist Jason Myers at his funeral