GREENSBORO, NC (WBTV) - One day after being removed from a puppy mill in Lincoln County, nearly 100 of the dogs that were taken to a Greensboro animal shelter were settling into their home.

WBTV traveled to the Guilford County Animal Shelter to see how the dogs were doing. 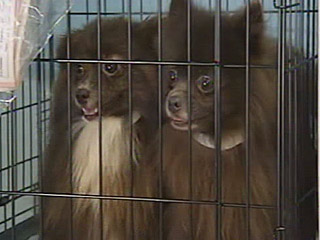 Workers at the shelter say many of them have skin conditions, heartworm, and other diseases.  Some are already being adopted out, but many will require weeks if not months of rehabilitation before joining a family.

The building on the shelter's property the dogs are staying in doesn't look like much from the outside -- it reminds you of an oversized shed.

But on the inside is a setup shelter executive director Marsha Williams says is unlike anything else she's seen in North Carolina.

Marsha says unlike other shelters, in Guilford County the dogs can be quarantined so they can be in a quieter environment for rehab -- and also so they don't spread disease to other animals at the shelter.

The facility also has an examination area, a sanitary bath, medical supplies, and even a "maternity wing" -- an area with extra-large cages where some of the mothers with puppies taken from the mill are staying.

If you're interested in adopting one of the dogs from Lincoln County, you can call the Guilford County Animal Shelter at (336) 297-5020

The puppy mill was shut down on Tuesday in Lincoln County.  Authorities say they'd warned the owner on Friday that she had to improve conditions or face fines and the possibility of losing the animals.

The vast majority of the dogs were taken to Greensboro.

Besides having the quarantine facility, another unique feature of the Guilford shelter is a "therapy park," an area to socialize dogs and help get them ready for adoption.

The therapy park includes a couple artificial turn areas dogs can play in, as well as an "agility course" where dogs can work out with handlers.

Marsha says many of the Lincoln County dogs will use the therapy park before being adopted out.

Man arrested in Georgia after one person shot at Mooresville Walmart

‘Well-respected member of the skydiving community’ with 17,000+ jumps dies in skydiving accident in Chester County

18-year-old arrested, identified as person of interest in death of Morganton man