Our love for superheroes is enduring, with roots spanning back to old mythologies and folk tales. 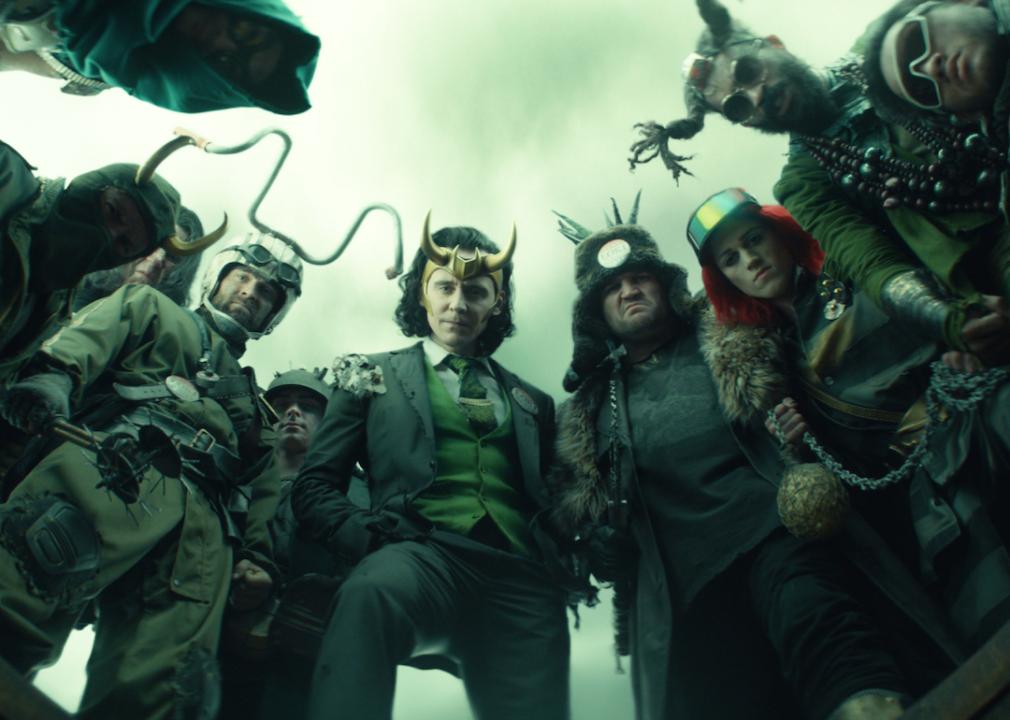 Our love for superheroes is enduring, with roots spanning back to old mythologies and folk tales. There are countless people of all ages who dive into comic stories of their favorite protagonists, anxious to see how they will process their next threat. A superhero’s story balances our reality alongside a fantastical world that sweeps us away from the ho-hum existence most of us face as we work, sleep, and repeat each day. Like us, superheroes endure loss in their stories through losing loved ones, being rejected by society, or perhaps simply feeling unsure of themselves in a confusing world.

But, through it all, they find their purpose and continue to press forward with a renewed sense of self, much like many of us. However, their journeys through life are exaggerated and complicated by incredible powers, some of which we wish we possessed. They make tough choices—sometimes those that don’t line up with our sense of morality—and try their best to make the world a better place. It’s the line between relatability and aspiration that keeps us tuned into their adventures, whether they are on pages, a big screen, or television. Hero movies continue to dominate theaters; however, there are a plethora of great superhero television shows that have given us amazing entertainment over the years.

To celebrate the heroes that endlessly delight and inspire us, Stacker surveyed the top-rated TV shows on IMDb and pulled the top 25 series about superheroes, ranked by IMDb user rating. To qualify, the show had to have at least 10,000 votes. There are many heroes that exist in the TV sphere but these heroes have the chops to make this epic list.

You may also like: Can you answer these real 'Jeopardy!' questions about TV shows? #25. She-Ra and the Princesses of Power

This animated series features Adora and Catra, orphans who became soldiers on the fictional planet of Etheria. They are in an army run by the tyrannical Hordak and follow along until Adora accesses the magic sword that turns her into She-Ra. Her new persona as the Princess of Power leads her to aligning with other kingdoms to fight for freedom. Thunderians, a band of aliens known who resemble anthropomorphic cats, leave their home place for refuge. The group finds a new world and fights evil in that space. The ’80s cartoon staple became a cult classic with comics, video games, and retrospective praise for its innovation. 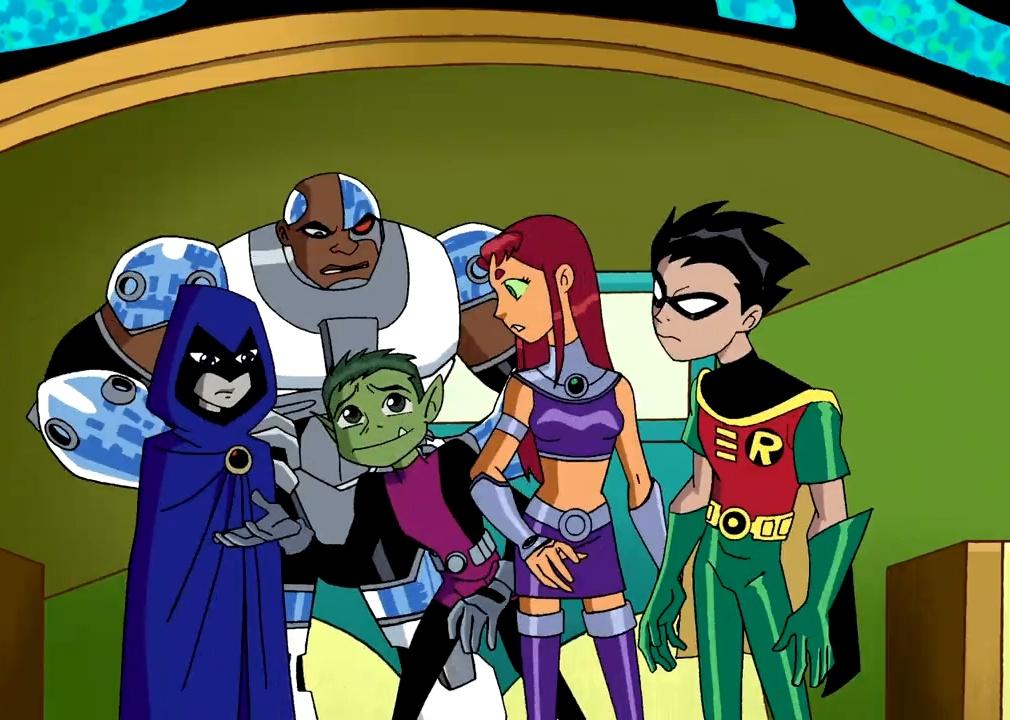 Robin, Cyborg, Beast Boy, Starfire, and Raven form a teenage superhero collective to protect Jump City from harm. They don’t separate their hero work from their lives, choosing to publicly walk around in their costumes. Additionally, the show also addresses issues many teens face including friendship and understanding their weaknesses. Four turtles get a hit of radioactive waste to become bipedal heroes in a half shell. The infamous turtles—Donatello, Michelangelo, Raphael, and Leonardo—learn martial arts from their teacher, a rat named Master Splinter, and fight crime in the streets of New York City. The show’s popularity led to a merchandising frenzy as well as catchphrases like Michelangelo’s “Cowabunga!” becoming a part of pop culture consciousness. 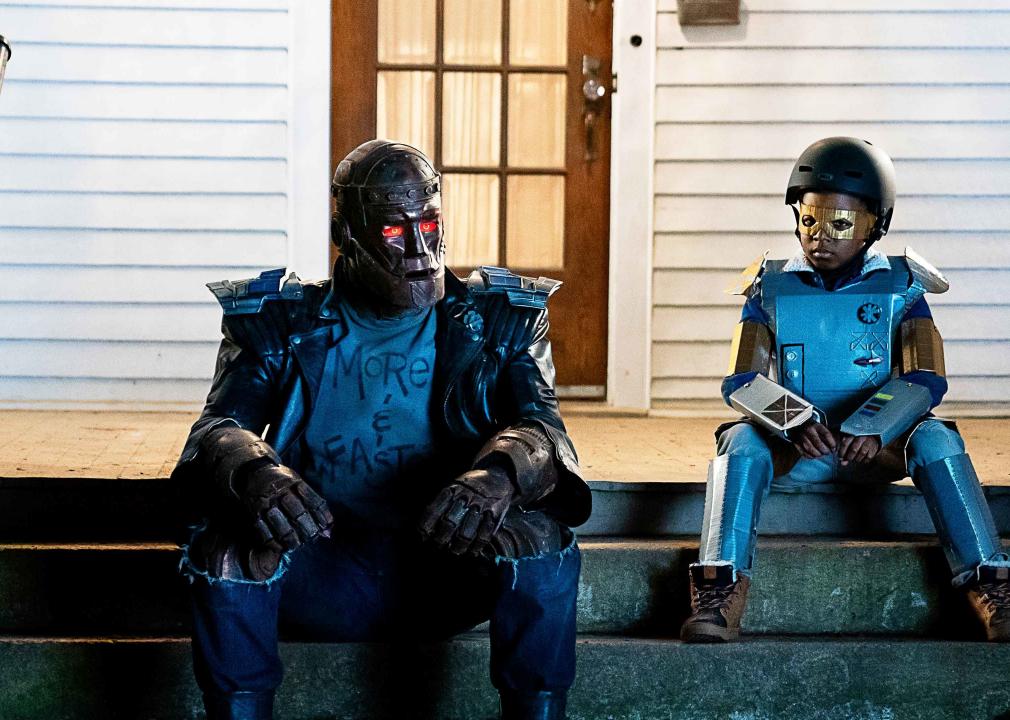 “Doom Patrol” features a roster of DC Comics heroes who are proverbial outsiders. They got their powers through shocking events and were under the watchful eyes of the Chief, a doctor who aims to protect them. A series of events sends them on a mission to learn more about their powers, lives, and the Chief himself.

You may also like: 30 best nature documentaries of all time 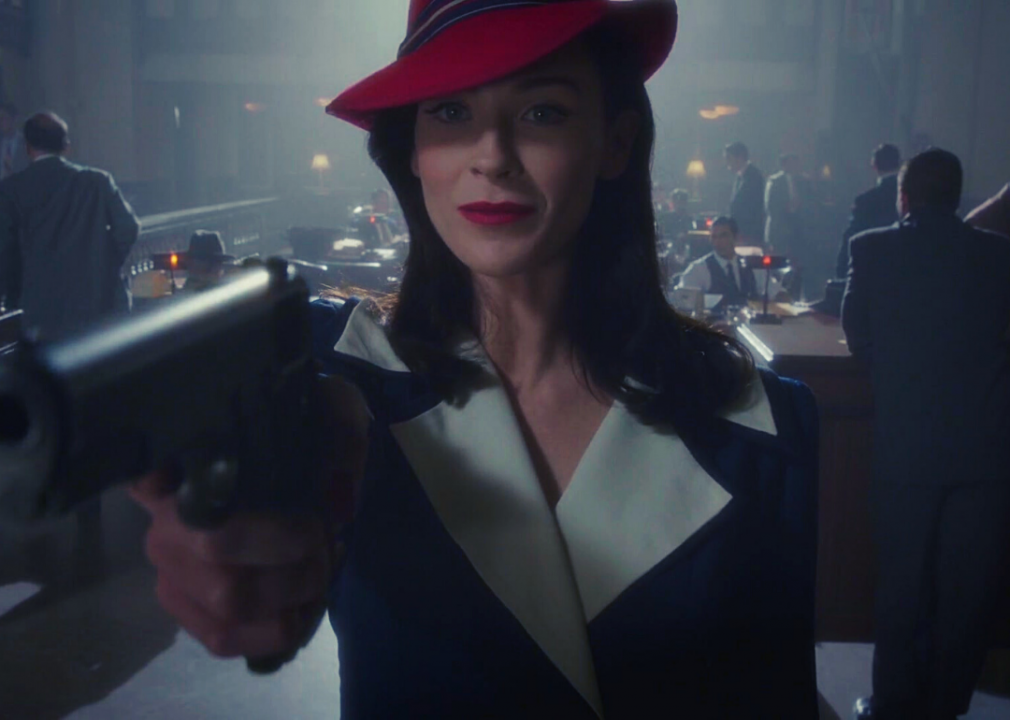 Marvel Comics’ Peggy Carter leads her own series about her life. Carter works as a secret agent but also deals with the typical issues a woman would encounter in the 1940s. The series ties into the overall Marvel Cinematic Universe established by films as well as other Marvel TV shows. 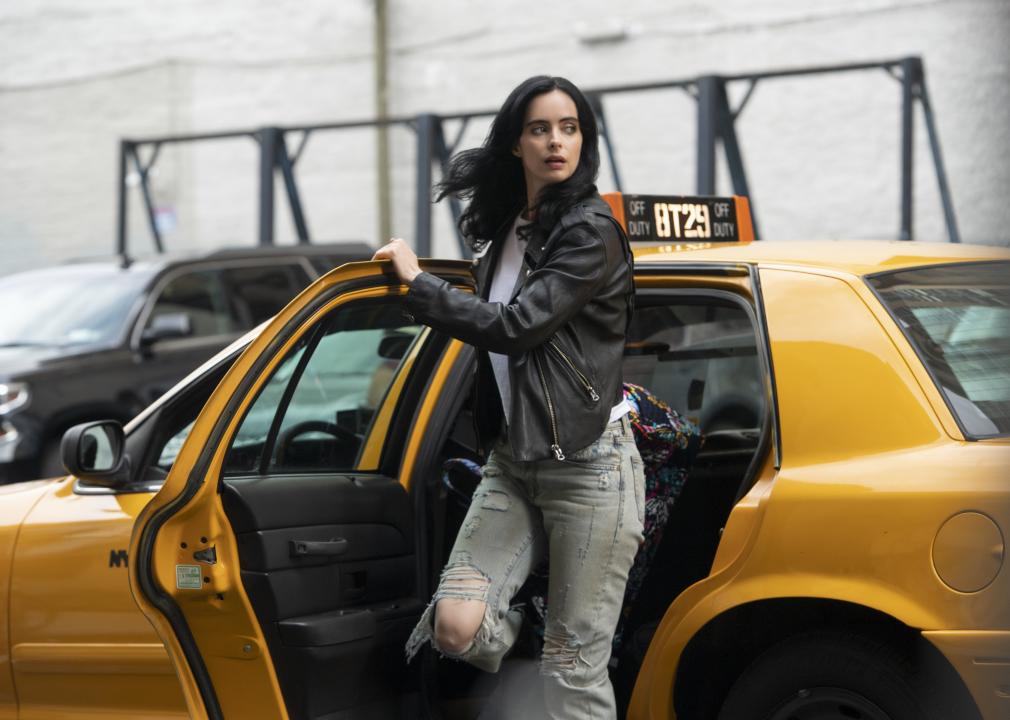 This show's title character (played by Krysten Ritter) is a woman with super strength who leaves the hero life behind following a tragic event. In turn, Jones becomes a private investigator, helping those in need while combating some of her own demons, both in her mind and in the flesh. She takes on more of an antihero persona with her cynicism and toughness. Jessie Custer (Dominic Cooper) is a wayward Texas preacher who becomes possessed by a half-angel, half-demon creature. Custer must move forward to understand more about this new power he’s been given and find a way to develop a more authentic relationship with God. “Preacher” is based on the bloody comic series of the same name by Vertigo, a DC Comics imprint. 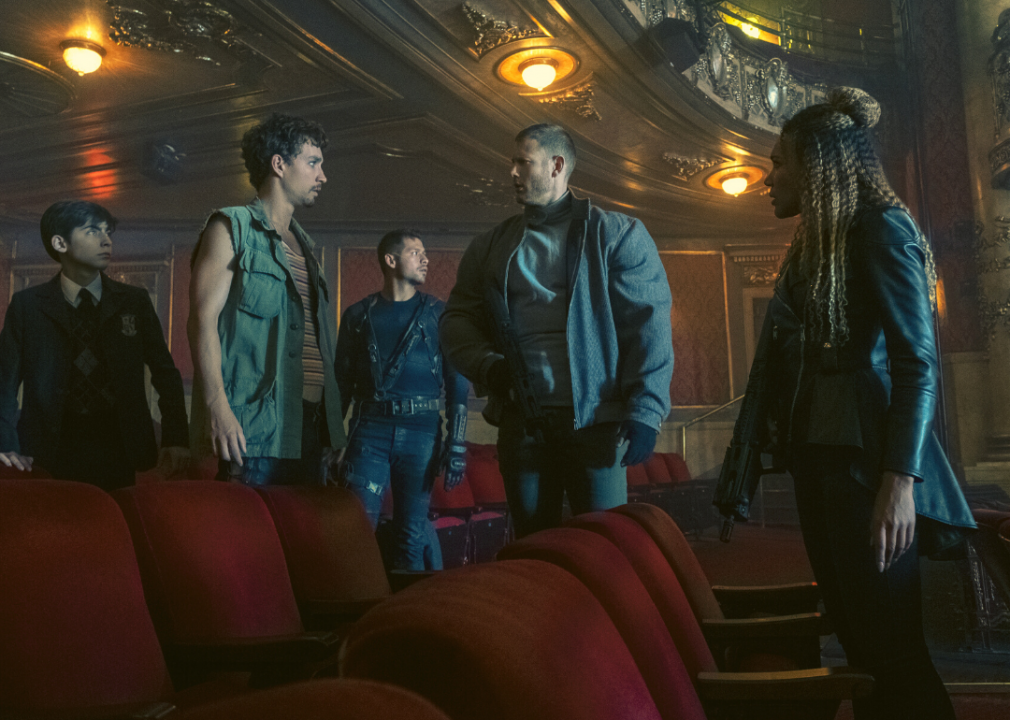 This dark superhero saga follows a superhero family of seven adopted siblings who have a wide variety of superpowers. The death of their eccentric father brings them together as adults, unlocking new mysteries as the world threatens to end. Based on the Dark Horse comic of the same name, the series also introduces an element of time travel, taking the collective to different points in time. 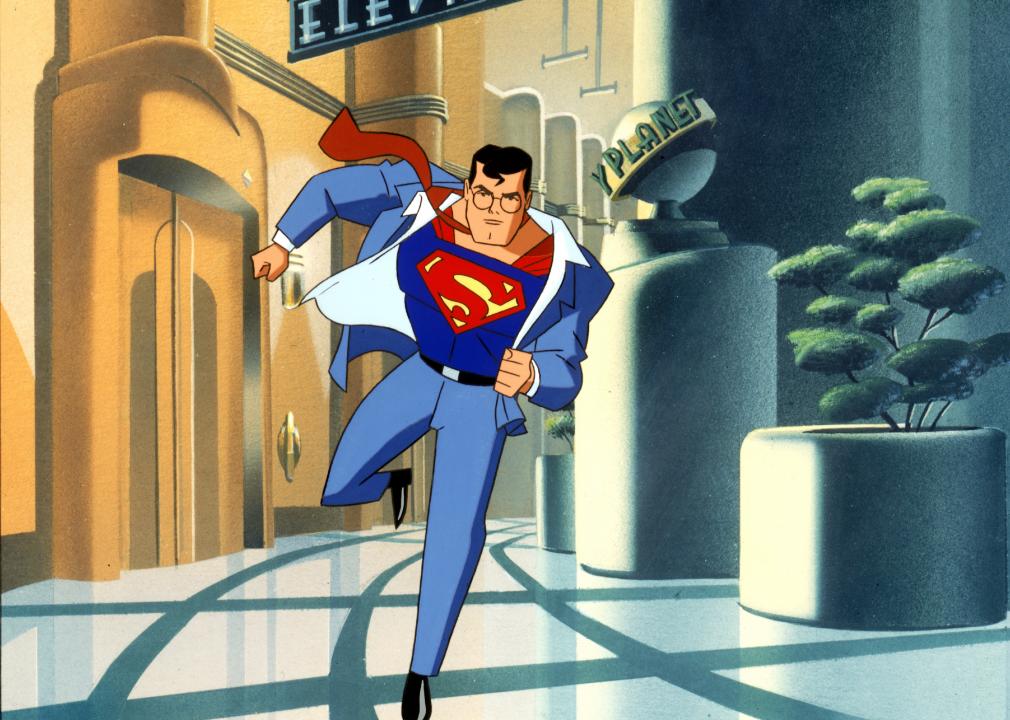 The DC Comics hero gets the animated treatment in this series. Kal-El—aka Clark Kent, aka Superman—tries to live a double life as a hero who works for a local publication by day. This series pits him against many established and infamous comic foes, such as Lex Luthor and Darkseid.

You may also like: The best streaming services in 2021 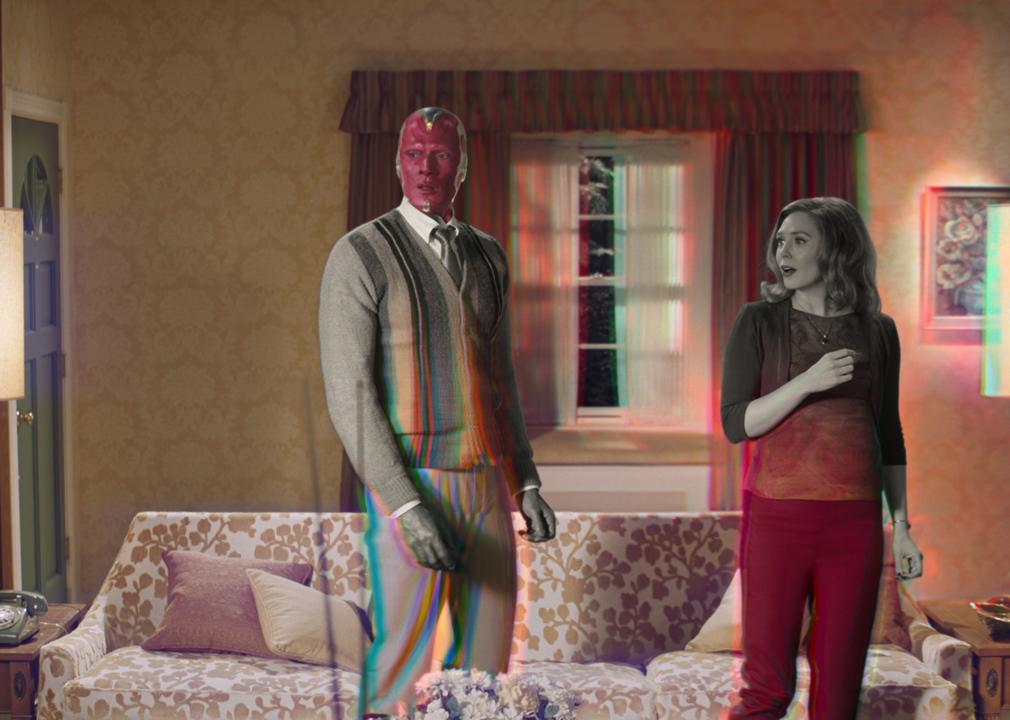 “WandaVision” follows Wanda Maximoff as she grapples with the events following “Avengers: Endgame” alongside Vision. The pair are seen living a dreamy sitcom-style life in Westview, New Jersey, hilariously hiding their powers from unsuspecting neighbors. But, there’s something deeper, darker, and far more tragic behind their seemingly perfect love story. 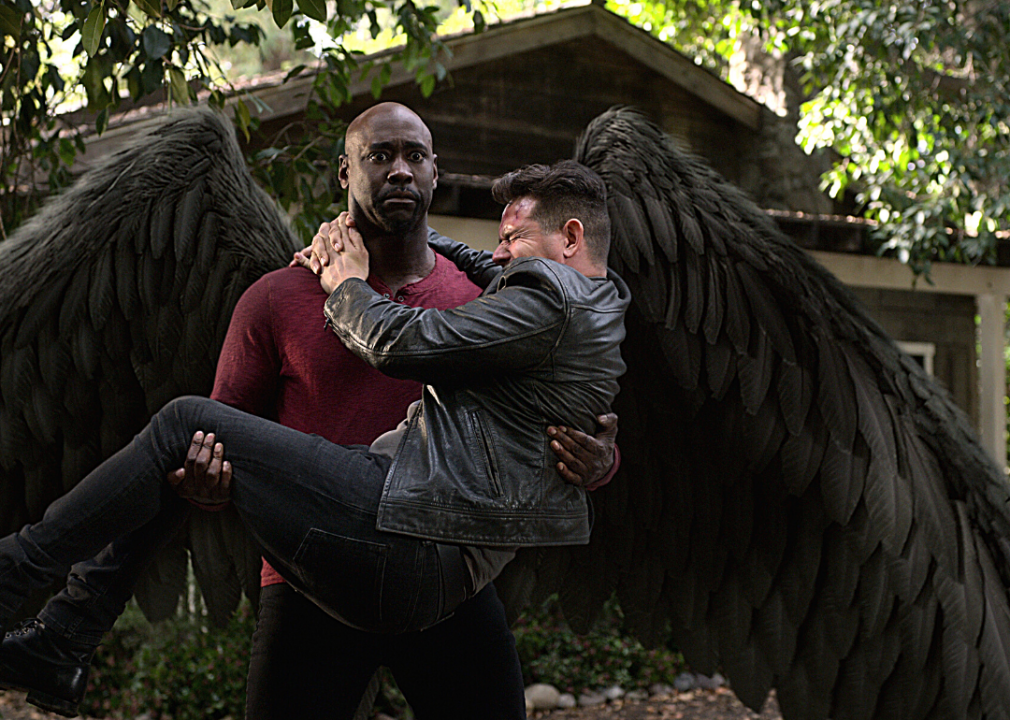 The Devil himself is the star of this series. Lucifer Morningstar (Tom Ellis) decides he wants to leave hell and heads for Los Angeles, where he runs a club and works with the LAPD. But, he’s not the typical depiction of a red being with horns. He’s handsome, charismatic, and incredibly powerful. The show’s character stems from the DC Comics character who appeared in “The Sandman” series. 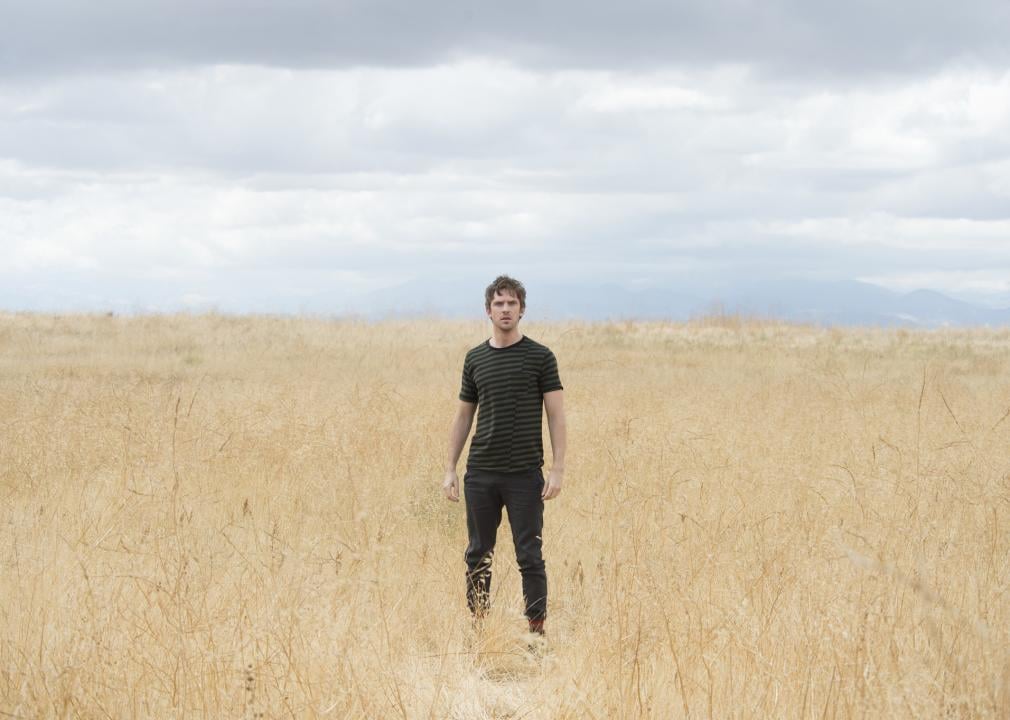 David Haller (Dan Stevens) spends most of his formative years in psychiatric hospitals because of a schizophrenia diagnosis. His latest residency leads to a discovery that there’s more going on with him than he imagined. A hunt ensues as he learns the truth about himself and his past, and later realizes and navigates his power through a series of events. 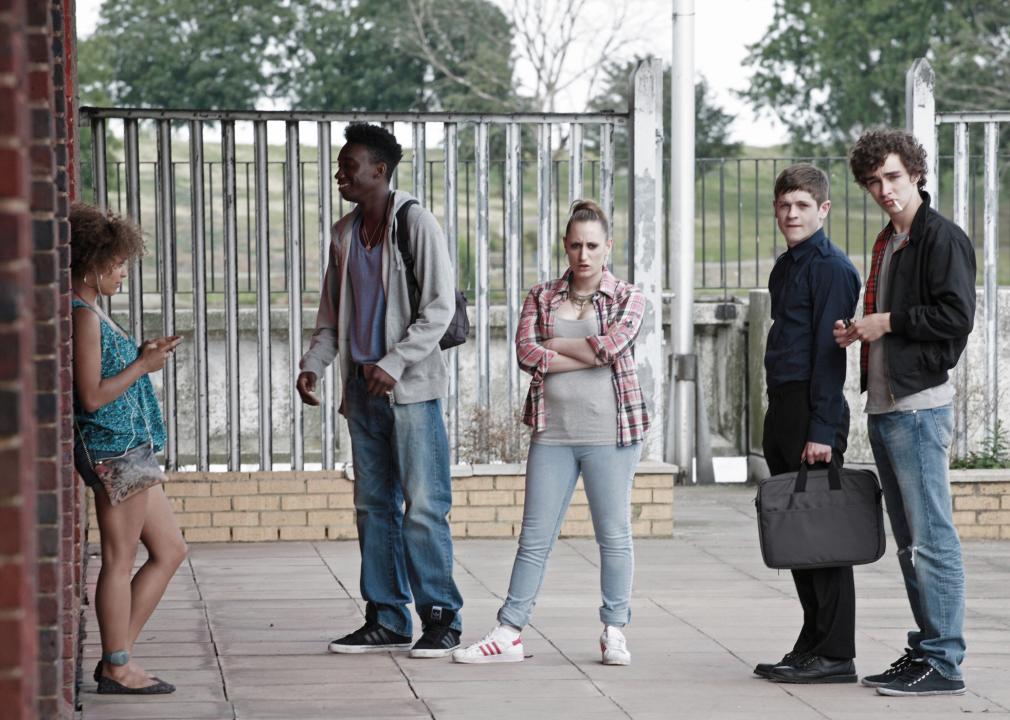 This British comedy show follows a group of wild teens working at a community service program. They encounter a storm that results in them attaining a range of powers associated with their lives and personalities. Together, the group must cover up a sad accident all while trying not to cause even more trouble with their newfound abilities. 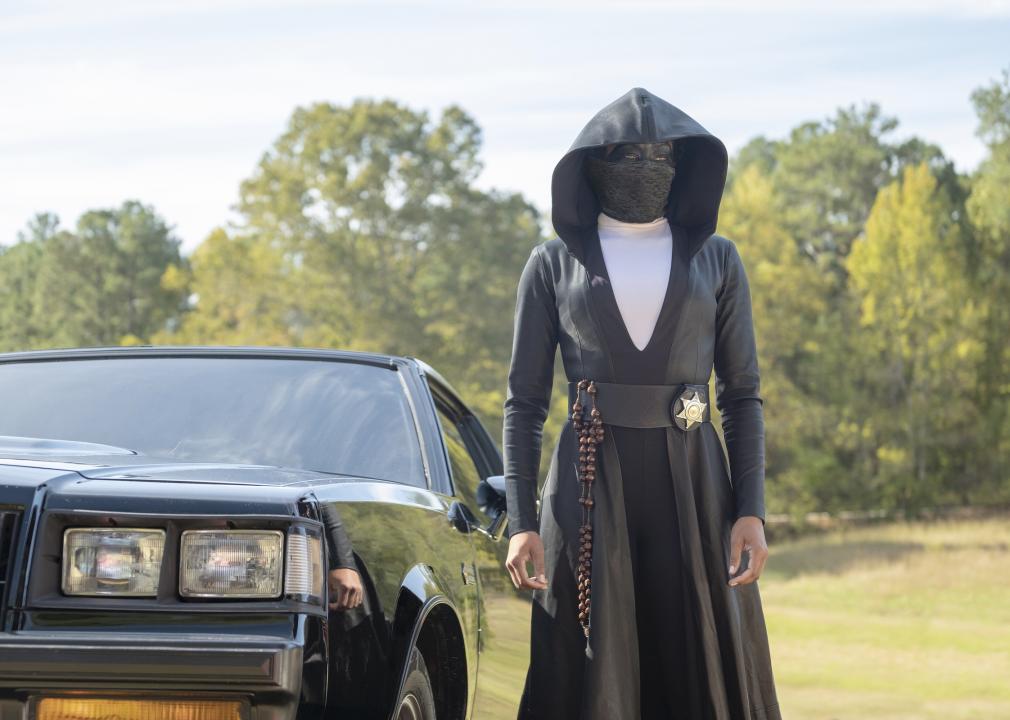 Regina King stars as Angela Abar, a police detective in Tulsa in a world where police wear masks to protect their identity. Abar herself has a dual identity as her vigilante alter ego Sister Night, who wields an arsenal of gadgets and a sleek ride. While investigating a white supremacist uprising, Abar uncovers details about her own life along the way.

You may also like: Fan campaigns that saved TV shows from cancellation 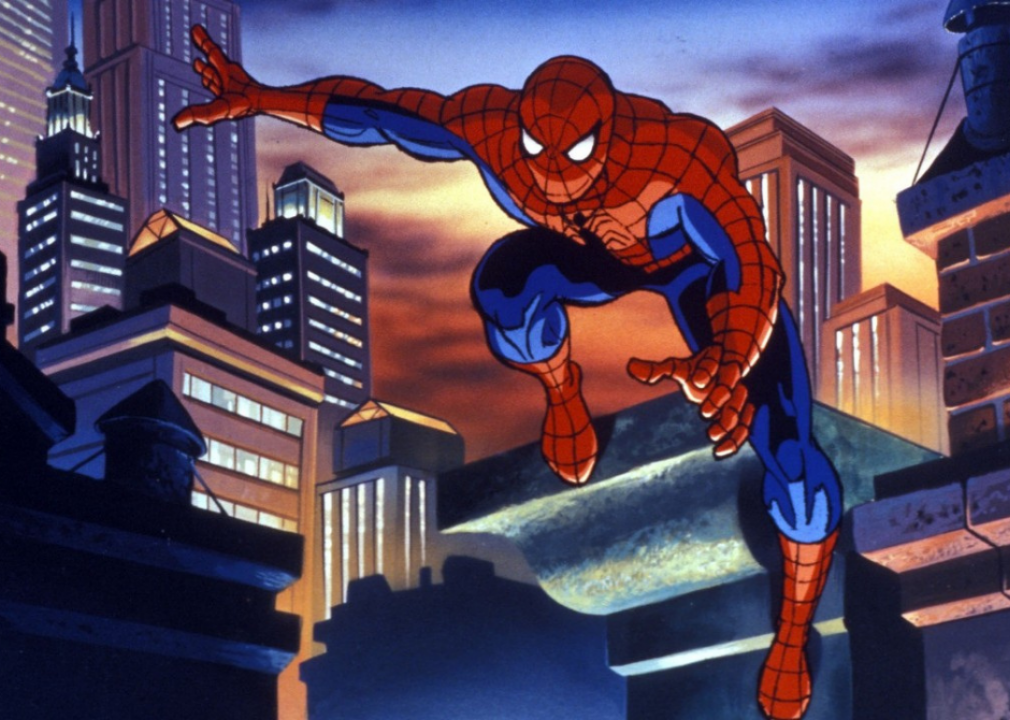 Peter Parker, better known as Spider-Man, is a college student trying to keep up with classes while also being a hero. In this show, Parker is already accustomed to his powers and works at the Daily Bugle as a photographer. Throughout the series, Spidey encounters fellow Marvel favorites like the Fantastic Four and Iron Man. 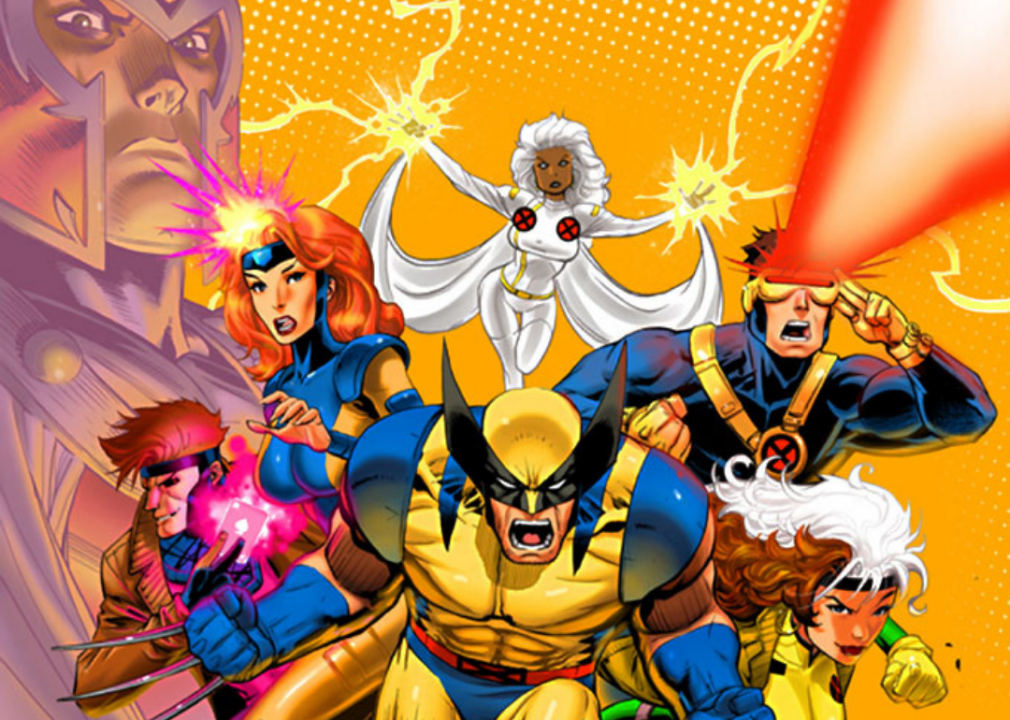 The infamous X-Men fight against evil forces all while dealing with their own sets of personal problems. The collective—which includes Storm and Wolverine—encounters foes like Apocalypse and Mister Sinister, who threaten to end the world and create evil mutants, respectively. 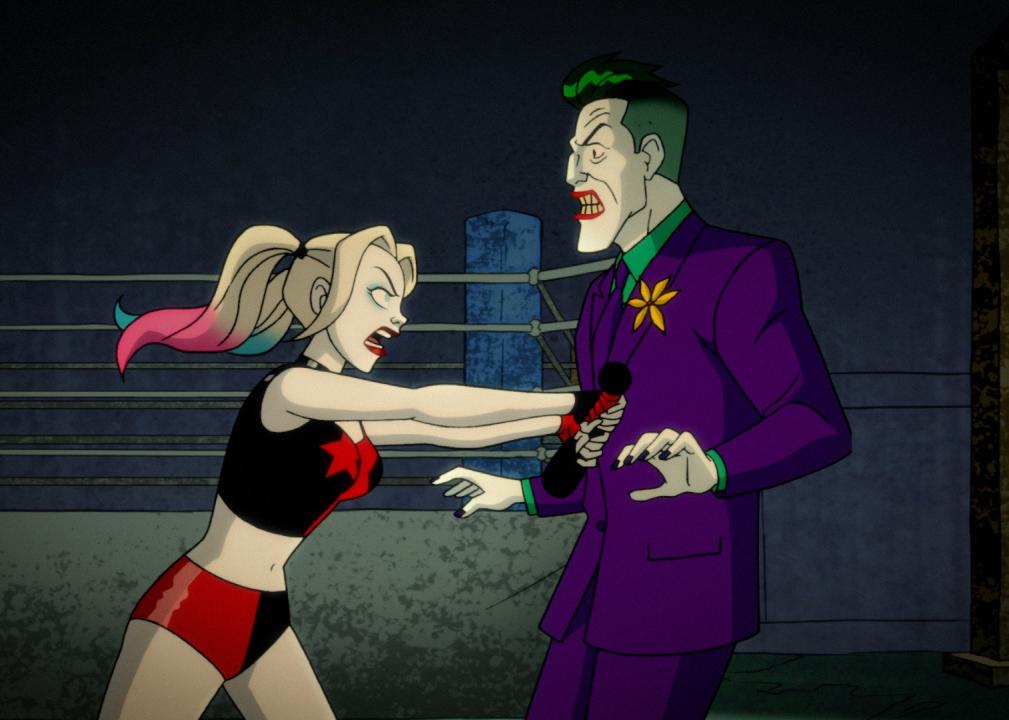 Harley Quinn comes to grips with the fact that her boyfriend, the Joker, is not only no good for her but is holding her back from being a better supervillain. She breaks up with him and goes on a determined quest to prove that she’s good enough for the Legion of Doom. Harley builds a tight friendship with Poison Ivy, with whom she makes her own haphazard evil collective. Former Marine Frank Castle (Jon Bernthal) seeks to avenge his family’s death as the Punisher, a moniker given to him because of his brutal methods for settling his scores. Castle’s quest to uncover the truth behind their execution opens up a trove of truths as he parses through his anger. He leans on his small circle of trusted associates and takes on a wide variety of foes, exacting justice by any violent means necessary. 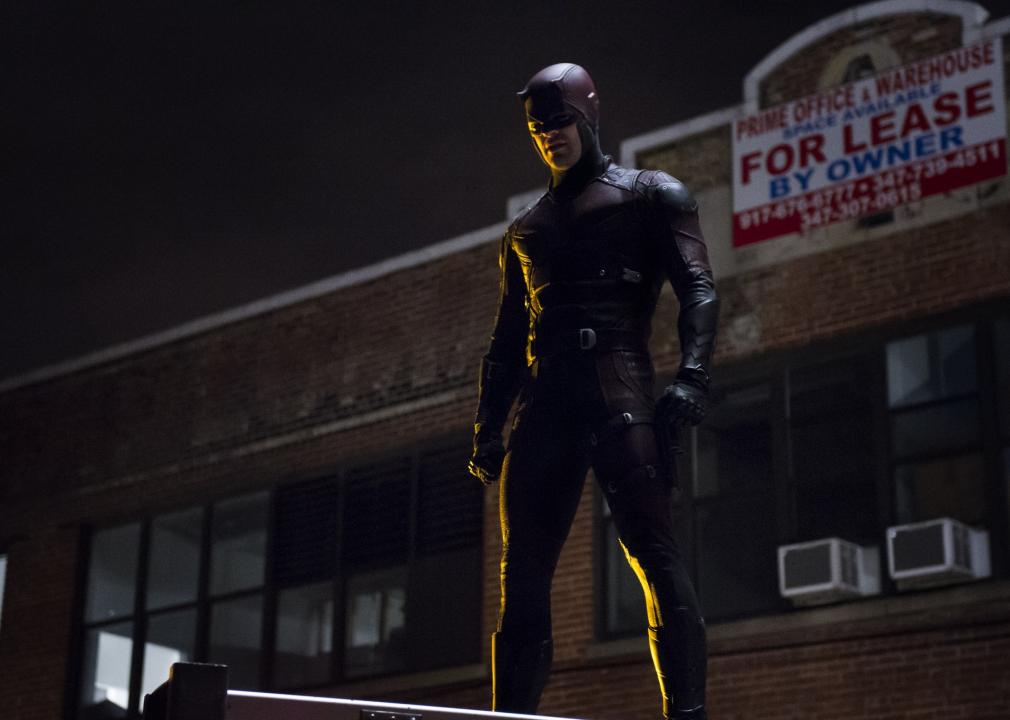 Matt Murdock (Charlie Cox) is a small-time lawyer who earns a living helping the little guy during the day. But by night, he looms the streets of Hell’s Kitchen as Daredevil, a dark-looking hero with incredible physical capabilities. His two worlds begin to collide as he takes on the likes of Wilson Fisk (Vincent D’Onofrio), a prominent crime lord with the worst intentions, and the Punisher, a man known for delivering brutal justice to his foes.

You may also like: Most Emmy wins of all time They may be superpowered but they certainly aren’t anyone’s heroes. The Boys includes a collective of heroes known as the Seven who live in a universe where they are public celebrities. They work for a massive conglomerate and will manipulate any situation to make themselves look good, often making corrupt decisions because they can. Conflict ensues after a tragic incident leads Hughie Campbell (Jack Quaid) to join the Boys—a group determined to uncover the truth—led Billy Butcher (Karl Urban), a superpowered person who hates superheroes. 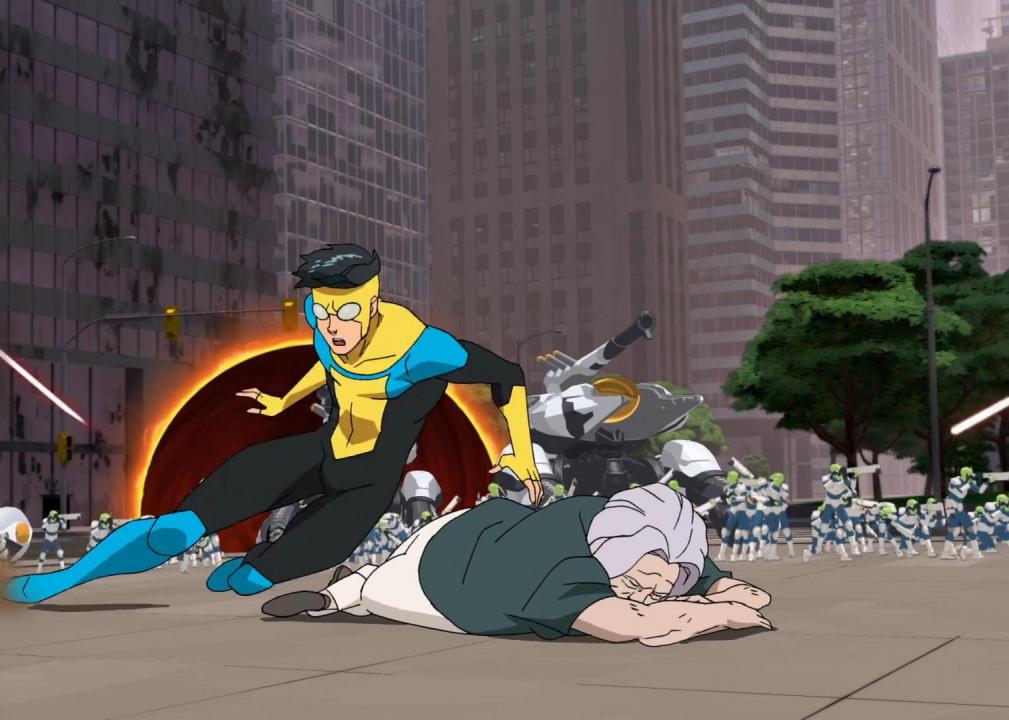 Mark Grayson, a college student and the son of a powerful superhero, aims to become like his father. The problem is, his powers haven’t activated yet, which leads him to wonder if he’s just ordinary. This animated show is based on the “Invincible” comic series by Robert Kirkman, who is known for writing the comic series “The Walking Dead.” 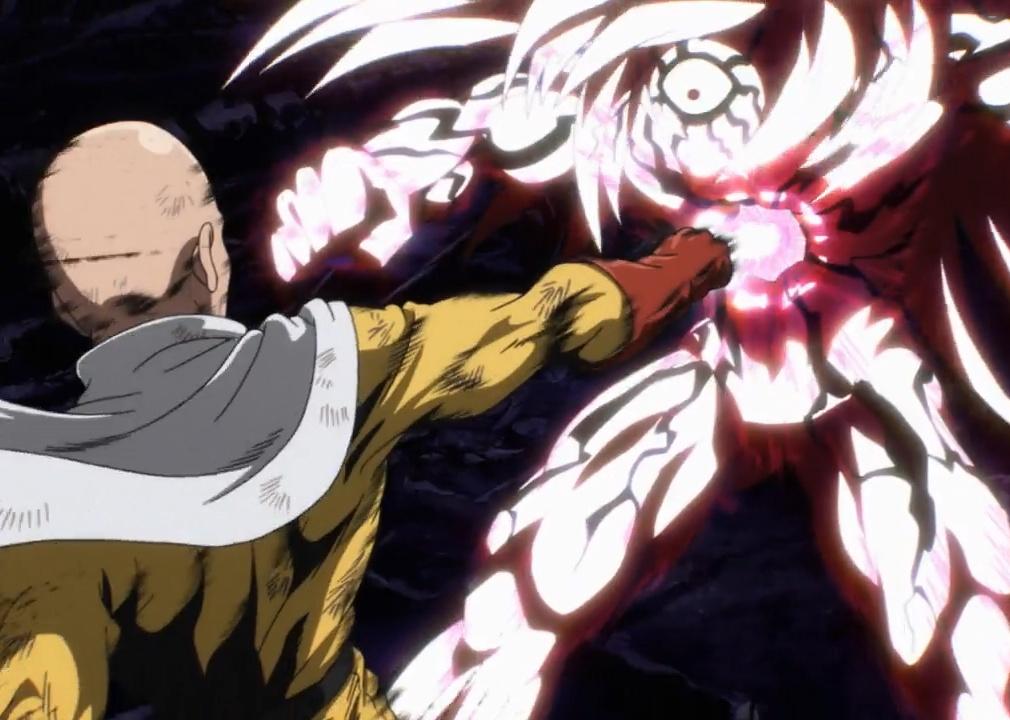 Saitama is a superhero who can end his foes with one single punch, hence this anime’s title. As expected, it's not thrilling to instantly knock everyone out, so Saitama goes on a quest to find a fighter who can give him an actual challenge, encountering interesting situations along the way.

You may also like: The best streaming services for sports in 2021 This series takes a dark, stylish, and incredibly entertaining approach to Bruce Wayne/Batman. Wayne lives the billionaire life while moonlighting as Batman, using his gadgets to beat up Gotham’s criminals. The show features a long list of classic DC Comics characters, including the Joker, who was famously voiced by “Star Wars” actor Mark Hamill. 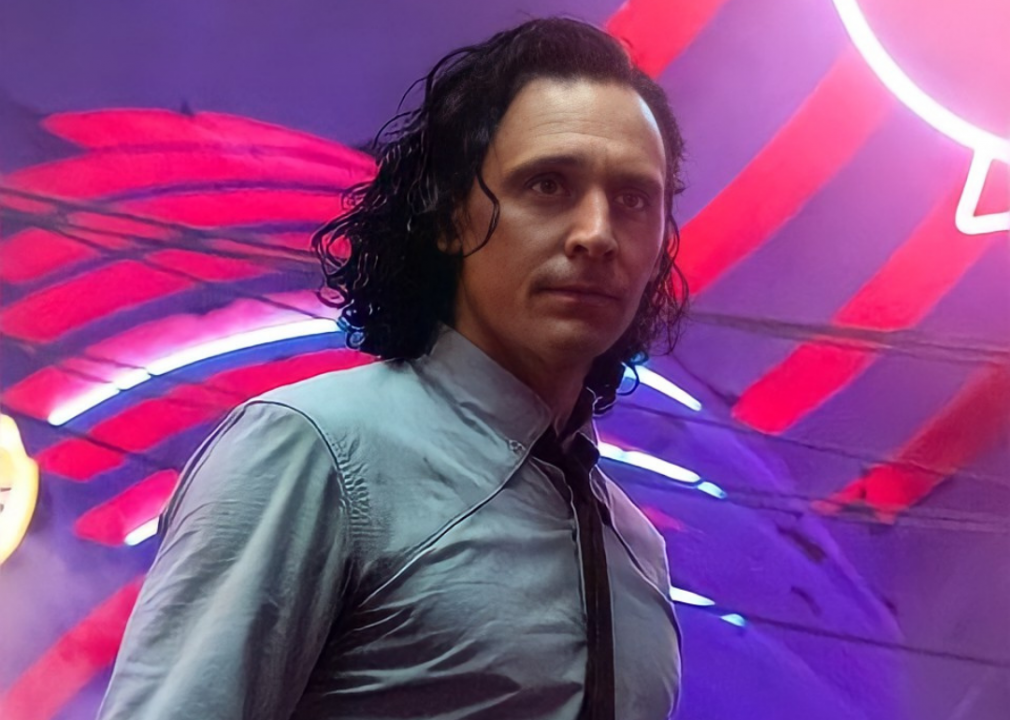 The God of Mischief (Tom Hiddleston) gets his own set of twisty time adventures in this series. After his exploits catch the attention of the Time Variance Authority, an organization above time and space that monitors timelines and doles out consequences for those who play too much, Loki is given an ultimatum: Fix timelines to stop further mess or cease to exist.

You may also like: Best TV Show released the year you were born

How to stay hopeful during tough times

Deadly crash involving tractor trailer shut down portion of I-85